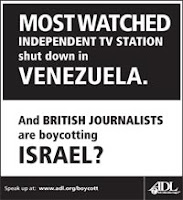 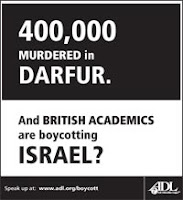 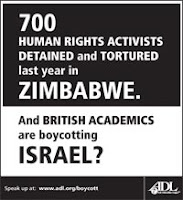 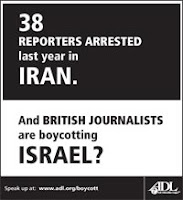 [compliments of ADL]
Posted by Deborah Lipstadt at 8:01 AM

We Scottish, Irish and Welsh REALLY REALLY appreciate you lumping us in with them.

Thanks, and keep up the good and oh-so-accurate-work

I have full sympathy with the Jews for I feel that they have always been targeted for no fault of their own.But today Israel should think of what they are doing with the palestinians?

You are doing a very good job. I accenditely found your blog but foun it interesting, will be tracking your posts.

Dear Harneet:
I am not precisely what you mean when you ask about what Israel is "doing with the Palestinians."

Given recent events in Gaza, I would say what about what the Palestinians are doing to themselves.

In fact I am not alone in this regard. MEMRI has gathered a group of cartoons from the Arabic press on recent events in Gaza.

Unlike apologists for the Palestinians, these are pretty hard hitting and recognize the damage they are doing to themselves.

This does not, of course, say that Israel has not done some wrongheaded -- if not more so-- things in regard to the Palestinians.

For the cartoons see http://memri.org/bin/articles.cgi?Page=archives&Area=ia&ID=IA36607

The National Union of Journalists is a trade union representing journalists in both the United Kingdom and Republic of Ireland, so it represents English, Irish, Scottish, and Welsh journalists.

Now, the interesting question would be: was support for the boycott more prevelent amongst the English members of the NUJ?

The University and College Union is also a UK-wide union.

Oh, don't worry about British journalists et al. they're just feeling a little guilty (God knows why) for having created Israel in the first place.

They don't really count you know in a 21st century world, now that old Blair has gone.

Those signs say it all. Some things are just that simple, aren't they? Over and over again, the Israelis are maligned for "human rights" violations while most of the rest of the world gets a free pass. Sad...

Re the term British vs. English [and for that matter Welsh, Irish, Northern Irish see: http://www.answers.com/topic/british-isles-terminology

And to all you Brits who took proper umbrage at the improper use of the term British, please remember
1) We Americans don't even know where most of our 50 states are

2)That the ads, despite being geogrpahically challenged, make a good (very good) point

According to the wikipedia articles on the NUJ and UCU, neither union restricts its membership to England or ethnic English. Both unions operate throughout the United Kingdom, which includes Scotland, Wales, and Northern Ireland.

It will be a time when men will call evil good and good - evil. May God bless you, indeed.