From Bucharest: What happens when 56 countries plan a meeting 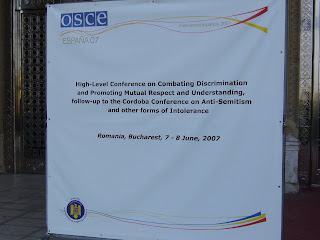 I referred to earlier to the UN resolution about the Holocaust and its failure to mention antisemitism. I continue to be flabbergasted by this. Antisemitism is “controversial” in that it is seen as helping and creating sympathy for Jews.

The absurdity of this is overwhelming. It’s hard to find an analogy. Of course, let us remember that this resolution comes from the UN which not only has a dubious -- to say the very best -- record on antisemitism and has, in fact, been one of the purveyors of antisemitism. Remember the Durban conference???

That is why a meeting of the OSCE which includes antisemitism in the title is noteworthy. But even the title of this meeting was a matter of great debate. The full name is

High Level Conference on Combating Discrimination and Promoting Mutual Respect and Understanding, follow-up to the Conference on Anti-Semitism and other forms of Intolerance

In addition to being the longest title to any conference I have ever heard of, note that the word antisemitism only appears as a reference to a previous conference. There were those counties which did not want to appear at all. Others protested. So the compromise was to mention it by referring to a conference which had already taken place.

Interestingly however the official delegate IDs we received do not include the part of the entire title. It stops after the word understanding. This is a way of not mentioning antisemitism.

[Though, as the picture shows, on the placards the entire title appears.]

The only way of describing this debate over the use of this word:

Posted by Deborah Lipstadt at 5:35 PM