From Bucharest: A reception at the home of the American Ambassador and a history lesson 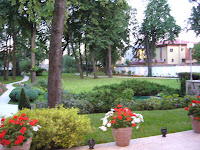 We ended the conference with a reception at the home of American Ambassador Nicholas Taubman and his wife, Eugenia. Ambassador Taubman's father helped negotiate the agreement with the Romanian government which resulted in the release [sale] of Jews so that they could leave the country in the 1960s and early 1970s. 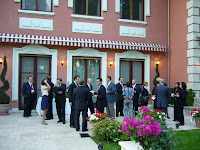 The Ambassador told us that the garden [above] used to be the site of 2-3 homes. They were simply torn down to create a larger garden for the communist officials. [After the end of communism the US government, I believe, had to make restitution to the families whose homes were destroyed.] 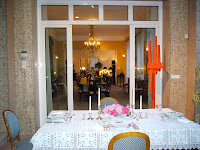 The home is quite beautiful with an indoor pool [visible from a small dining room]. The house has an interesting history. It was "given" to Anna Pauker, the Foreign Minister of Romania in the Communist regime. She expanded the house to include the pool wing. 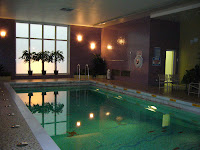 Next door to this beautiful home is a pretty decrepit apartment house. During the communist era, in order to keep ordinary people from seeing how the communist officials lived they erected a large sheet to block the view. Every couple of days the sheet would be blown down and have to be replaced. 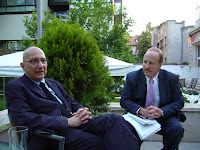 Posted by Deborah Lipstadt at 9:55 AM