From Bucharest: An Egyptian distorts and an American explodes 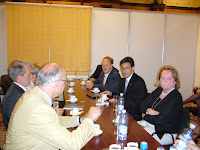 [Ambassador Julie Finley at bilateral meeting with representatives of Finland. Rep Cantor is to the left and Dr. Gregg J. Richman of the State Department to his left.]


In a previous post I noted that some amazing things had happened at yesterday's session. It is early a.m. and I am rushing off to breakfast but, since I won't have a chance to blog until tonight, I thought I should explain what happened.

During the session on antisemitism [more on that later], the Egyptian representative said that "antisemitism does not exist in the Arab world. Jews have lived the best part of their history in the Arab countries until the first half of the 20th c."

He then said one must distinguish between antisemitism, anti-Judaism, and anti-Israel practices. He stressed that he was not talking about anti-Israel attitudes but practices. Here, he said, was the crux of the relationship between the Middle East conflict and the phenomenon of antisemitism.

He then said: "I feel nervous that Jews are being portrayed as subjects of hatred. It is wrong to portray Jews as victims. Jews are strong and have an influence that is rising in other countries."

I simply could not believe what I was hearing nor, for that matter, could Ambassador Finley, the US ambassador to the OSCE. By this point she had taken the US chair at the table.
She signaled asking to be recognized and when she was she let loose.

She said, turning to the Egyptian representative, "If you think Jews have not suffered and are not the most likely to suffer your brain is swimming in caramel." [She later said that they had some sort of caramel dessert at the luncheon for the heads' of delegations and that's why she used that metaphor. I wonder how the translators dealt with the word caramel.]

"When Algeria refuses to go to a seminar hosted by Israel what can of cooperation is that? I am challenging you all go back to Vienna and solve the problem of antisemitism. The others [forms of intolerance] will take care of themselves."

Whew. It was quite a statement. The reactions were varied. Some people praised her for being so direct, particularly to the Egyptian. Others, who agreed with her statements, felt that it could have been said in a more constructive fashion.

She certainly left no doubt where she stood.

BTW, the session ended with the chair saying to the Egyptian: "Egypt suffers from the same problem we all face."
Posted by Deborah Lipstadt at 12:10 AM