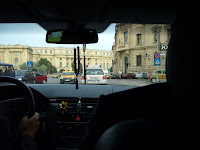 Morning 1: Early a.m. The delegation met over breakfast. One of the things that had to be decided was who was to sit in the USA chair at each of the different sessions.

I was assigned to sit in the position of delegation chair for the session on Education against Intolerance, Holocaust education. [Each country has one seat at the table and the rest of the delegation sits behind. Same set up as Security Council except much bigger.]

The best part was that we had a police escort and cut our way through the traffic. Too bad we did not have that on our way in from the airport. Note in the picture how the traffic is pulling aside for us as the police car clears the way.

In the car going over Rep. Cantor and I discussed the great concerns of the State Department officials over his speech and their feeling that matters needed to be worded very carefully lest we inadvertently insult a country and make it harder to work with that country in the future.

I told Canto that, apropos of the big debate yesterday over his remarks, in November 1938 right after Krystalnacht FDR was asked about events in Germany. He dodged the question and said: “Better ask State [Department] about that.”

Then he watched the human outcry – media, Universities, churches, political leaders etc. – speak out he knew that it was safe for him to say something. So at his weekly [!] press conference five days later FDR read a strong statement. It had been prepared by the State Department. But he felt it was not strong enough. So he added his own words to strengthen it.

We laughed at the thought that the same dance continues to play itself out 70 years later.
Posted by Deborah Lipstadt at 4:46 PM