From Bucharest: A Bi-lateral meeting with the British regarding the UK boycott of Israeli academics etc. 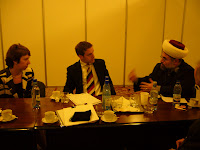 When we had our briefing the State Department folks stressed that much of the "work" takes place in bi-lateral meetings, i.e. meetings where two delegations sit face to face and discuss the issues of concern to them, particularly as they relate to the delegation across the table.

Our first bi-lateral meeting was with the Rt Hon The Baroness Ashton of Upholland, the UK Parliamentary Under Secretary of State.

She spoke of the UK's strong desire to address antisemitism, diversity issues, and questions of immigrants and their acculturation to British society. She pointed out that her husband is descended from Austrian immigrants who were forced to flee from that country when the Nazis took over the country.

Gregg Rickman urged her not to conflate the different issues and pointed out the steep rise in number of antisemitic events in the UK. He also urged the prosecutors be pressed to utilize the laws on the UK books which guard against racial and religious incitement.

Imam Talal Eid, of the Islamic Institute of Boston and Muslim Chaplain at Brandeis, cautioned the Baroness that one cannot depend on members of the Muslim community to report on dangerous people in their midst. Simply put, he stressed, they are frightened. They have been frightened by extremists in their midst. They are simply too scared to stand up to extremists.

He spoke with passion and with force. [Later I pointed out that he had used the word terrorism while places such as the BBC and NPR insist on the pareve "militants." He laughed a bitter laugh and pointed out that the Fatah al-Islam [those who invaded the Palestinian camps and situated themselves there and began fighting with the Lebanese army] had killed Lebanese soldiers.

"If that's not terrorism," he said, what is?

We also discussed the academic boycott. The Baroness condemned it in no uncertain terms. We strongly urged that the British government take pro-active steps to address this problem. It had, we reminded her, terrible potential to spread.
Posted by Deborah Lipstadt at 6:57 PM