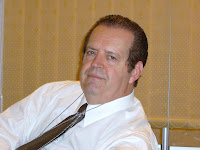 During the bi-lateral meeting with the British, Dr. Richard Land, President of the Southern Baptist Ethics and Religious Liberty Commission made a powerful and unequivocal condemnation of antisemitism.

He described antisemitism as unique which must be recognized as having the potential to do violence in an unparalleled fashion.

My guess is that there will be those reading this blog who are not fans of the Southern Baptists. One must, however, give people such as Dr. Land tremendous credit for their absolutely unequivocal and forceful condemnation of this phenomenon.

Though one might argue that they are simply stating the truth, given the reluctance of so many others to see things in this fashion, I say Bravo.
Posted by Deborah Lipstadt at 7:17 PM