From Bucharest: Discussion of Antisemitism 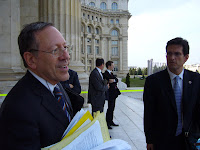 [Former Canadian Minister of Justice and Attorney General Irwin Cotler and Rep. Eric Cantor, leader of the US delegation in front of the "Palace."]

The discussion of antisemitism was, as is predictable at a gathering such as this, all over the place. At times it got caught up in or lost in the general talk about intolerance. At other times it was hard hitting and quite specific.

The Israelis were quite specific in what they thought should be done in response among the actions they called for was a demand issued directly to the Iranians that they stop the campaign of Holocaust denial and antisemitism. They also urged educational and legal approaches to the problem.

Interestingly the Chair of the antisemitism session, Dr. Bert Wiesskirchen, supported Minister Herzog's comments and stressed that the demonization of Israel is none other than antisemitism in another guise.

What is clear is that in many countries there is a new kind of toxic antisemitism which involves young people among others. One delegate commented that there was a feeling that "Europe has been caught in maelstrom that shows it has not liberated itself from demons of the past."

In certain countries there has been a "revival of the Jew as a mythical enemy." Part of this stems from a hostility to the idea of a united Europe and, of course, to a severe anti-Americanism and to all forms of Western influence. There is a basic intolerance of diversity in many European countries.

Those who feel disenfranchised by the changes in their society find antisemitism increasingly attractive.

Another point of view was that, while antisemitism is not the most acute problem in Europe, it is so much discussed because the way in which it is addressed is a litmus test of the strength of democratic institutions in a society.

One delegate said it can point to a degree of moral health.

The French delegate acknowledged that the recent rise in antisemitism may be linked to the war in Lebanon but that that is not only factor.

The delegate called attention to the fact that the figures which report on antisemitic incidents often do not take account of low intensity antisemitism which is to be found in streets: harassment, public discourse during political campaigns, proliferation of racist, antisemitic, xenophobia Internet sites.

The French made specific mention of the Halimi incident, the young man who was tortured to death for mere fact of being Jewish. The "Middle East had no part to play here. He was killed just because he was Jewish."

Irwin Cotler, who spoke on behalf of Canada, noted that the Supreme Court of Canada had observed that the Holocaust did not begin in gas chambers but with words. He attacked Ahmadinejad who supported "state sanctioned on fundamental principles that underpin Helsinki accords."

After the bombing of a Jewish school in Montreal, Rex Murphy, a CBC commentator observed that "the bombing was directed at the Jewish community as a whole. To ignore that particularity is to diminish criminality."

Cotler stressed that the "demonization of Israel can provide license for attacks on Jews. It is not discrimination in the abstract. It attacks Jews in their specificity. ... These are not random acts of racism but intentional acts of Jewish hatred. Don’t ignore particularity of this hate. If we ignore it harm victim a second time."

Other things were said but in the end the question remains, what kind of action can be taken to address the situation.

More thought on this later.
Posted by Deborah Lipstadt at 12:24 AM