Tom and Jerry: A Plot by the Jews 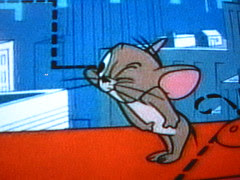 A story, about which I blogged last year, is once again making the rounds. It concerns an Iranian professor who has "discovered" that the American cultural icons, Tom and Jerry, the cat and mouse cartoon characters, are part of the Jewish conspiracy. In short, Tom and Jerry are a ploy to make people think well of mice and, by association, of Jews.

This news was broken by Hassan Bolkhari, an Iranian professor of philosophy who is a member of the Iranian Film Council and a cultural advisor to the Iranian Education Minister in a speech at an Iranian film seminar [translation courtesy of MEMRI, where you can view the clip].

Bolkhari told his audience that the cartoon characters “Tom and Jerry,” a creation of the “Jewish Walt Disney Company,” were actually elements in a conspiracy designed to improve the public image of Jews.

[Ignore, if you will, the facts that “Tom and Jerry” was created by the Hanna Barbera team in the MGM studios and at the time of the creation of Tom and Jerry, the Walt Disney Company was a place that was not particularly hospitable to Jews. Those are just irrelevant detail of importance only to Jews and troglodytes.]

Bolkhari made it all sound quite rational.

"If you study European history, you will see who was the main power in hoarding money and wealth, in the 19th century. In most cases, it is the Jews.”

In their hording, he charged, they were acting just like mice. This was the origin, Bolkhari explained, of one of the derogatory terms used to refer to Jews, “dirty mice.”

In an attempt to counter this negative impression, Jewish cartoonists created a cute mouse who would make people laugh. Bolkhari told his audience that:

“the mouse [in the cartoon] is very clever and smart. Everything he does is so cute. He kicks the poor cat's ass. Yet this cruelty does not make you despise the mouse. He looks so nice, and he is so clever.”

Of course, Bolkhari continued, contrary to the impression left by this endearing mouse, Jerry, mice are actually “very cunning...and dirty,” just like Jews. That is one of the reasons, he added, Hitler hated them.

Don’t dismiss Bolkhari as some fringe kook dredged up by MEMRI to poke fun at the Iranians. According to the 2005 Iranian Short Film Festival, where he was a judge, he holds a Ph.D. in Islamic Philosophy and teaches philosophy at Tabatabaei and Al-Zahra Universities in Iran.