From Sarajevo: A survivor of the siege reflects on his experience 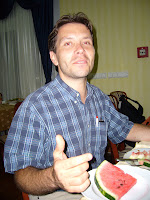 Dzido, a young Bosniak [Muslim] who was here for part of the siege and was then a teenager, reflected for me about what happened here. He told me that in his apartment block there lived two Serbs who worked in the national bakery.

During the siege it became exceptionally dangerous to stand on bread lines or to gather at places where food could be found because these places became targets for shells and bombs.

These two Serbs would bring food back to the apartment each evening to save the other inhabitants of the building [most of whom were Bosnia Muslims] from subjecting themselves to danger. His story and so many others reflect the fact that this was a 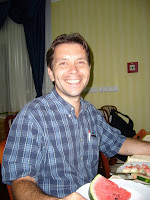 city that was really integrated.

On Monday night I was interviewed by one of the most well known newscasters here. She was described to me as the Christine Amanpour of Bosnia. She's a Serb. The deputy commander of the forces which defended this city was a Serb.

Eventually he was evacuated out of the city with his family because he needed medical treatment. He was rescued [evacuated] by the Jewish community -- whom he describes as

"more Sarajevian than the rest of the Sarajevians... After all they have been here longer"

He says that when he asked why are you helping me he was told:

"You are a Sarajevian. We are Sarajevians. And we won't forget how we were helped in the 1940s."

My point is that Jews, Moslems, and Serbs lived together. There may well have been tension but there was also real integration. Lots of young people told me they dated people from the other group and did not give it a second thought.

As a student of the Holocaust it seems to me that, just as it is important to focus on the horrors and to tell that story, it is also important to make people understand that there was another way in which people lived before the war.

There was a time in the 1970s and early 1980s when survivors of the Holocaust were a bit hesitant about focusing on the story of the rescuers. One said to me: "Won't that make other people think that everyone was a rescuer when, in fact, rescuers were few and far between"

I responded that no, I did not think that would be the case. Rather, I said, it will show that the answer sometimes given about the reaction of bystanders in Europe to the Holocaust: "There was nothing they could do," is simply not true. There was a choice to do otherwise and some people made it... at great risk to themselves and their family.

So too in this troubled region. There were and are people who have made choices to break the mold of distrust and hostility. In Sarajevo they made that choice for many many years.

Dzido told me that when he met some foreigners in the old city of Sarajevo they asked him if before the war there were separate restaurants and cafes to which Muslims and Serbs frequented. [She did not mean by law but by custom]. Dzido said to me:

He is a compelling young man and over dinner on my last night here, he said:

"After what I went through what is most important to me in life are human relationships."

It seems well worth remembering.
Posted by Deborah Lipstadt at 12:29 AM

Few corrections: Christian Amanpoure is not Serb, she is British.

Also, I am not sure who you were refering when you said: "Eventually he was evacuated out of the city with his family because he needed medical treatment."

If you were refering to the deputy commander, I assume, Bosnian Army General Jovan Divjak [Serb] - he was not evacuated from Sarajevo because he stayed there to defend it from Serb Army's brutal attacks.

The international community (aka: the U.N.) could had done more to save Sarajevo and Bosnia, but instead - they prevented us from getting arms to defend ourselves, and in Srebrenica they totally abandoned us.

What else can I say? Did the world learn anything from the Holocaust? We have another genocide going on in Rwanda and what is world doing?

Correction: I meant, Darfur. We have another genocide going there and the world is doing very little (aka: nothing) to stop it. The world will never learn...