From Sarajevo: On meeting a real hero who put his job on the line and lost or... won 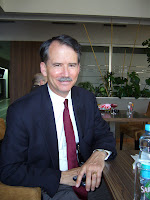 One of the participants in this conference is a man named John Evans. A long time State Department employee who served in many important posts including American Ambassador to Armenia.

Apparently he was much beloved in this country and went everywhere without a guard or entourage.

Then, about six months after taking up his post, he went to a conference in Berkeley and spoke about the "genocide of the Armenians." Despite the fact that President Reagan has used the same term, Evans had contradicted current State Department policy.

He told the State Department what he did and lost his job as a result [not immediately but clearly as a result]. He is now writing a book about this.

I hope it sees the light of day in the near future.
Posted by Deborah Lipstadt at 11:40 AM