From Sarajevo: Scenes from the synagogue and the Jewish cemetey 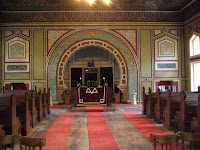 This is the only remaining functioning synagogue in Sarajevo. It's Ashkenazi but the prayers are according to the Sephardic tradition with some Ladino [Judeo-Spanish]. The design and architecture shows, as do so many synagogues world over, the influence of the architecture of those in whose midst Jews live. 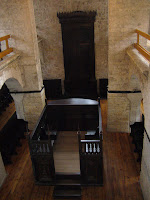 The other synagogue was built in 1521. Today it is a newly refurbished museum. This picture is taken from relatively new upper level built in 1821.

The community actually had good relations with all groups. As one Bosniak [Bosnian Muslim] said to me: The Jews are more Sarajevian than most people from Sarajevo. They have been here longer. 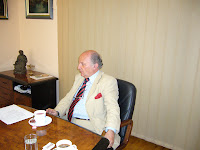 The Jewish community is lead by a fascinating man, Jakob Finci. He is the first member of his family not to be born in Sarajevo in 350 years. [He was born in an Italian concentration camp after his family was deported from Sarajevo. He talked about the relations the Jewish community has had with Serbs, Muslims, and Croats. During the recent war the community was caught in between.

He has dreams of some sort of reconciliation effort along the lines of what happened in South Africa, though he recognizes that religious differences make it more complicated. He pointed out that Willy Brandt, who went to Warsaw and fell on his knees in an act of contrition, had spent most of the war in Norway, i.e. he did not have anything to personally apologize for.

So too, it is necessary to find those who have committed crimes and wrongs [on all sides] and for them to engage in reconciliation. I told him that I thought it was way too early to try this.... but who knows? Right now the history seems to real and too raw. 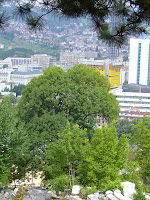 In the hills above Sarajevo is the Jewish cemetery. During the recent war it was used by snipers from both sides [Serbian and Bosniak (Muslim)] to shoot at the city below. The reason is obvious. From it you have a very clear shot right to the center of the city and to the area that became known as "Sniper's Alley. The yellow building you see is the Holiday Inn, built for the Olympics, but famous during the war because many journalists stayed there and it was virtually destroyed.

was mined heavily and was only recently returned to the Jewish community after being 98.2% de-mined. Nothing, Jakob Finci was told, is 100%.

It contains some distinctive tombstones which are so old that their inscriptions are virtually unreadable.
Posted by Deborah Lipstadt at 11:28 AM

Jewish cemetery was extensively bombarded by Serb military throughout the war. The photo you posted [ http://3.bp.blogspot.com/_Kz3AWeSPG6Q/Rpfg34weOdI/AAAAAAAAAT0/Htdkiav-RsE/s1600-h/SarajevoCemetery.jpg ] is too small. Can you maybe upload the bigger one?

Thank you for the beautiful photos of the Sarajevo Synagogue. This is the first time I was able to see the inside of this beautiful place.

I recognized Jakob Finci the minute I saw him. He is a wonderful guy. I read in local Bosnian media that he was considering running for a president of Bosnia. If he does, he has my vote.

Another thing I am curious about Deborah is this photo:
http://3.bp.blogspot.com/_Kz3AWeSPG6Q/Rpfaw4weOZI/AAAAAAAAATU/ZzMDhi_57zk/s1600-h/Sarajevo+2+015.jpg

It seems they are building huge skyscrapper (look right side of the photo). What is that? It's a really tall structure under construction? Can you please find out what that is?

PS: You are wonderful person Deborah, you know that? Don't you? Of course you know.

Did you visit to see precious Sarajevo Haggadah? Please don't miss it. It's absolutely precious piece of Jewish and Bosnian history.