Basketball Coach's antisemitic slurs: Ignorance? Latent [Potential] Hatred? Stupidity? All of the above? 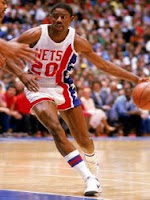 When the sports columnist suggested that such a remark might offend Jews because it supports the stereotype that Jews are "crafty and shrewd," Richardson replied:

"Are you kidding me? They are. They've got the best security system in the world. Have you ever been to an airport in Tel Aviv? They're real crafty. Listen, they are hated all over the world, so they've got to be crafty."

When he was asked why are they hated, Richardon continued with his sociological analysis.

"They know that in this country the Jews are running it if you really think about it," Richardson said. "I mean, which is not a bad thing, you know what I mean?"

"How are they running it?" he was asked.

When the reporter told him such statements were "analogous to asking a black person to visit because there's fresh watermelon in the refrigerator," Richardson protested that what he said was:

His boss, the general manager, at first, did nothing but said that Richardson probably did not know his statements would offend someone and if he felt so inclined he should apologize.

My guess is that Richardson thinks he was being complimentary about Jews. Of course, philo-semitism esily flips over into antisemitism. Should that smart Jewish lawyer lose, Richardson may just say: That crafty Jewish lawyer...

What this coach needs is an education about prejudice, stereotyping, and hatred. He has now been suspended. He might be reinstated if apologized.

If he is forced to aplogize, he will probably be coached into saying the right thing. In his heart, however, he might well be convinced that his is only apologizing because Jews indeed are in control and he has been forced to pay his "pound of flesh."

To further complicate the issue he also called a fan a "faggot" and told him to shut the f--k up.

Here's where education has a role to play. This guy does not need to be taught why you can't say such things. He needs to be taught why saying such things -- about Jews, African-Ameircans, gays, etc. -- are dangerous.
Posted by Deborah Lipstadt at 8:51 AM