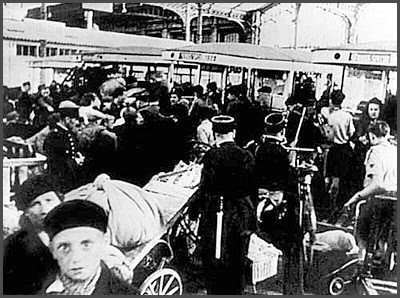 I should have posted this earlier. However, since it took France's highest court 67 years to come to the conclusion that it bears responsibility for having organized and carried out the deportations during the war, I guess a few days delay is not a horrendous thing.

If you look at pictures of the famous Paris round up in 1942 you will search in vain for German soldiers or SS men. You will see only French police. [At the trains where Jews are being loaded in the cattle cars you do see Germans but the round ups were conducted by French.]

If French civilians (their police forces included) can do this, why is it so difficult for some to understand Daniel Jonah Goldhagen's thesis about Germany's civilian population's participation in the Nazi genocide against the Jewish people being more prounounced than was previously assumed?

"The eliminationist ideology, derived from the German cultural cognitive model of the Jews, was at the root of the policies of the 1930s which the German people supported. The genocidal program of the war was grounded in the same ideology and set of cognitions. It was a more extreme 'solution' to a problem, the diagnosis of which had long been agreed upon in Germany. Seen in this light, the leap from supporting the eliminationist policies of the 1930s to supporting a genocidal 'solution' is not as great as it has been almost universally supposed to have been." -Daniel Jonah Goldhagen

The political background of the
deportations is interesting.

The Vichy government was most jealous of it's reputation for legitimacy.

One of the props of "collaborationism" was the fiction that the German government and French government were dealing with each other as equals since in theory (don't gag) the French army had not been defeated in World War II-- proof of which was the fact that there had never been a formal peace treaty but only an armistice, or cease fire.

I know it sounds strange but this was how Vichy government types thought about the defeat.

So, to Pierre Laval and Marshal Petain it was very important
that they be seen as protectors of the French people against the germans. For that reason they always had to seem "in control".
Their legitimacy depended on this.
In a word they would kill their own citizens at the German's request if it could be made to seem that the French were still in charge.

Still, what a shock to the fiction of Vichy "legitimacy" when Hitler demanded the immediate deportation of French citizens of Jewish ancestry.

The Vichy fig leaf was to deport foreign born Jewish non-citizens first. They played that off as the repatriation of migrants.

They tried to hold onto the fig leaf for a while and not deport their fellow frenchmen. All the while the Germans kept demanding more French Jews.

This blow to French self-respect was so enormous that it led Laval to hold off for a while.

All the while the Germans
were not only demanding, but getting railcars full of gentile Frenchmen to work in labor battalions in the East. This was called "reparations" for the French having started the War.

Finally the fiction of Vichy
legitimacy crumbled under German demands for bodies. And so the French began to shamelessly send to death French Jews, some of whom had won the Croix de Guerre in the first World War.

One must remember in all of this Vichy had no real compassion or pride in protecting French Jews. They only wished to protect their rapidly disintegrating image. They were not yet a puppet state but they knew that at any minute they might become one.

In the background of all of this is a long history of French anti-Semitism which boiled above the surface in the Dreyfus Affair.

French feeling against Jews was large in as much as a
very popular movement among French intellectuals-- Action Francaise --had been preaching anti-Semitism for at least a generation before the defeat.

No doubt popular anti-Semitism was a major force in the deportations.

However the proximate reason for the use of gendarmes was to persuade the French people
that they still had a government and they shouldn't listen to those radio broadcasts coming from London which featured the rantings of an ambitious, and egotistical Colonel named Charles de Gaulle,who apparently, just like the men of Vichy, also believed that the French had not really been defeated.

StGuyFawkes : "in theory (don't gag) the French army had not been defeated" : whose theory is that ? Probably not that of Philippe Pétain who said in his 11 October 140 speech : "France has known, 4 months ago, one of the biggest defeats in its history". Also the Vichy Regime launched a series of political trials (the Riom trials, named after the name of the city of Riom where they took place), trying former members of previous Republican governments for being responsible of the defeat. See http://en.wikipedia.org/wiki/Riom_Trial

Action Francaise was forbidden by the pope. Members of Action Française refusing to disband were forbidden to receive sacraments in churches. Philosopher Jacques Maritain, who had been close to the Action Française before the pope forbid it, whose wife was a Jew, was influential in convincing Roman catholics that antisemitism is not compatible with christianity.

I concede your point on "the defeat" and the evaluation of the defeat by Vichy. I was grossly overstating my point.

Nonetheless, the fact of things never having come to a formal treaty, I believe, was a kind of "fig leaf" for the men of Vichy. Your point about the Riom trials makes my point in a different way: Vichy needed to legitimate itself as the partner with Germany in a New Europe.

They considered themselves to be a "National Revolution" leaving the seedy 3rd Republic behind.

My point was that the new state of Vichy needed most of all to show it's competence in everyday things like rounding up criminals, keeping the water running, controlling immigration.

It was very important to the men of Vichy that the unoccupied portion of France be visibly administered by French.

That included the roundup of Jews.

My view of Action Francaise and yours are not different.

Action Francaise and Charles Maurras practiced an anti-Semitism born of the Dreyfus Affair.

Nonetheless, it hosted young intellectuals as diverse as Jacques Maritain and Robert Brassillach. It was during the "between the Wars years" what A.F. was called "le berceau du Droit" -- the cradle of the Right.

Everybody who was anybody was in that organization if they were Catholic, intellectual and bourgeois.

I think of it sort of like S.D.S. in America during the Sixties. It was just the rage among the young and politically excitable.

After the excommunications by Pius XI it seems to never have recovered. It's membership drifted either to the left or further to the right.

Maritain was and is the glory of French Catholic literary life. He was "un resistant du premier moment" like his pal de Gaulle, and he among other resisters helped save the honor of France during the years she was "on the Cross".

ONe thing you pointed to with your reference to the Riom trials touches on Dr. Lipstadt's question as to how the french took so long to acknowledge their complicity.

I think part of it is that the French feel and think differently about the nature of the State than we do. Historian Robert Paxton who is the dean of Vichy Studies, says that the French see the state as having a moral value independant of any underlying social contract.

In other words, unlike the American and English view that the state comes from the will of the people, the French feel that the state, just by being a state, provides basic functions of defense and civil order; and therefore, it has a moral structure independant of the people.

So it was easy for Maurice Papon and other collaborationists to feel that they were serving the state like any other state and therefore, needed no natural law justification for the morality of what they were doing. That included the rounding up of Jews.

Add to this that the French think of their government as not a government but a 1st, or 2nd or 3rd, or 4th or 5th Republic and I'm guessing it has been easy all these years for them to think of the deportations as an abberation which did not belong to the real republican France of the 5th Republic.

I need to read more about this. It's just a thought.

I suppose it is dangerous to be swayed by a solitary picture, but with you accompanying commentary I feel genuinely horrified.