I have posted on Professor Kevin McDonald, who testified [voluntarily and poorly] for David Irving previously. An in depth profile of him by Brad Geenberg appears in the LA Jewish Journal. Greenberg also discusses his experience interviewing McDonald on his blog.

To read McDonald's testimony brief testimony at my trial see www.hdot.org [ pages 6-24. ] He clearly had no idea what the trial was about. I discuss his ludicrous performance in History on Trial, Chapter 10.

[The photo at the right shows Kevin MacDonald being honored in 2004 for his work on the Jews by The Occidental Quarterly, a white supremacist publication. He was accompanied by Virginia 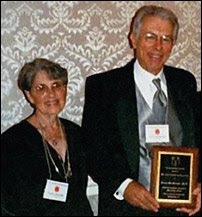 McDonald has discussed the clannish behavior and negative influence of Jews on the show of Hesham Tillawi. It's long, tedious, and pretty sobering when one thinks that this kook -- and I could use words far worse than that -- is a professor at an American university.

I am a firm believer in academic freedom but it seems that Cal State Long Beach is really pushing the matter by continuing to award him with merit leaves -- a hard fought privilege at that school -- and the like. I just wonder what would happen if he were saying these things about other minorities....

Finally, I am reminded of what Professor Dan Jacobson of the University of London had to say about McDonald after his testimony: "That witness had a small dull mind possessed by a large dud idea."
Posted by Deborah Lipstadt at 6:36 AM