Boston's Musuem of Fine Arts [2]: Rewriting History to Save a Painting 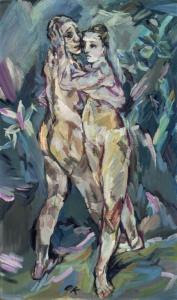 
In an earlier post I criticized Boston's Museum of Fine Art's contention that Jews in Vienna were acting in free will when they disposed of their possessions in 1939.

The debate centered on a painting by Kokoschka which a Jewish family had sold in Vienna in 1939. The MFA, which currently has possession of the painting, argues that the family was not forced to sell the painting but did so voluntarily.

Let's remember the historical context: Eichmann was on the scene and was doing everything possible to get Jews to emigrate without any of their possessions. To argue that they were selling possessions because they "wanted" to is ludicrous.

Well it turns out that -- not surprisingly -- other historians feel similarly. See the most recent article by Geoff Edgers on the topic.

It is striking that the MFA refuses to release its own art historians report on the painting. I can't help but wonder why.
Posted by Deborah Lipstadt at 8:59 AM

"Eichmann was on the scene and was doing everything possible to get Jews to emigrate without any of their possessions."

not to mention the fact that Jews' lives were, essentially, being ransomed through the imposition of exorbitant export fees (probably the wrong description -- but I mean Jews wishing to emigrate had to pay enormous fees to obtain visas), plus Eichmann set up a "trade" system whereby Jews abroad were forced to pay enormous sums to "finance" the costs of German and Austrian Jews emigration.

Even if this sale was not "forced" in the sense of threats of arrest or incarceration in "protective custody" if the sale was not made, the economic duress placed on Jews at that time was tantamount to the very same thing.