Rwanda: A Meeting in Montreal Dedicated to Rwanda Genocide Denial... Is Cynthia McKinney Going to be There?? 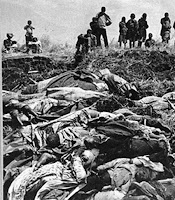 As someone who teaches about the Holocaust and, of course, Holocaust denial, any form of genocide denial infuriates me. The meeting of Rwanda genocide deniers which is scheduled for Montreal is an outrage. Read about it here

This is something that causes great pain to Rwandese survivors and damage to historical accuracy.

I would be upset about it in any case. But, as I noted in a previous post, according to reports my former Representative, Cynthia McKinney is supposed to be there. Those of us who had the dubious privilege of watching her operate up close and personal have no great respect for her.

I am not sure what can be done but anyone who is concerned about the history of the Holocaust should add their name to this petition. If you are someone who has been directly touched by the Holocaust, please note that in the appropriate place

As soon as I finish this post I plan to do so.

If only there was more we could do. If the image above does not move you because it seems so impersonal, then I hope the one to the left of a survivor will do so.

I hope Canadians will express their outrage.

At the least let's embarrass McKinney out of appearing... Though, based on her record, methinks she does not embarrass easily.... if at all.
Posted by Deborah Lipstadt at 12:45 PM

MONTREAL - A planned conference in Montreal, Canada, due to be addressed by people known for denying the 1994 Genocide has attracted increased rage and criticism, with some protest comments appearing on an online petition which until last evening, had been signed up by 618 people.

The conference due to be held on Saturday is seen as an act intended to open the wounds of the survivors of the 1994 Genocide and Rwandans in general, especially coming as the country is preparing for the fourteenth commemoration of the victims of the Genocide set to begin on April 7.

The meeting is due to be addressed by French author-journalist Pierre Pean, Spanish lawyer Jordi Palou-Loverdos, Belgian journalist Peter Verlinden and Canadian author Robin Philpot, all of whom have publicly negated the Genocide which cost the lives of over one million people in a spate of 100 days.

In the online petition on a Montreal-based Rwandan community (Hobe Montreal)’s website, www.hobemontreal.ca, petitioners expressed shock and grief that Canada had agreed to play host to a meeting of revisionists whose aim was to distort Rwanda’s history and to cover up those responsible for the Genocide.

"As a son of Holocaust survivors, I am deeply offended and ashamed that such a gathering of Genocide deniers is allowed to take place in Canada. Please put a stop to this injustice! Let us not add to the suffering of those who survived, and let us not sully the memories of those who did not," said one of the petitioners, Sam Chaiton.

And in Kigali, a team of Canadian and Rwandan activists is spearheading a campaign to denounce the Montreal conference, and says the revisionists should be dragged to courts of law.

"I feel even more concerned because I am a Canadian and I cannot accept that such a thing might happen in Canada," Dr Denis Roumestan, a lawyer-turned-missionary, who is also the President of Justice and Equity Inc., said yesterday.

Roumestan and his wife, Florence Bolvin-Roumestan, who have worked in the Great Lakes Region for the last seven years, together with three Rwandans walked up to the offices of The New Times Publications in Kimihurura to condemn the planned gathering.

"When it comes to contesting the Holocaust of the Jews, there are specific actions that have been taken against those contesting it after lots of organizations, institutions and individuals have petitioned courts over such deniers. Canadians should do the same to Genocide revisionists," a seemingly furious Roumestan said.

"Judicial proceedings have been conducted and injunctions sought in Canadian courts to stop conferencing of people denying the Holocaust. Why then should a conference denying the Genocide in Rwanda be organised in Montreal?" he asked.

Referring to the definition of genocide under Chapter 24 (Bill C-19) of the Crimes Against Humanity and War Crimes Act (Provisions of the Rome Statute), the activist said the timing of the conference itself amounted to committing genocide.

‘For the purpose of this statute, genocide means any of the following acts committed with intent to destroy, in whole or in part, a national, ethnical, racial or religious group, as such (a) killing members of the group; (b) causing serious bodily and mental harm to members of the group,’ reads part of Article 6.

"What they (Genocide deniers) are doing is to cause mental harm to survivors of the Genocide. Why do these conferences always come around March or April? That is committing genocide already because they are organized around the periods of Genocide commemoration," he said.

Calling for prosecution of Genocide deniers, Roumestan observed there was a precedent when the Canadian Human Rights Tribunal in 2002 conducted a trial involving a denier of the Holocaust, Ernst Zundel, in which the Mayor’s Committee on Community and Race Relations, and a Holocaust survivor, Sabina Citron, filed separate complaints alleging that Zundel "was placing messages of the world wide web that were likely to expose a person or persons to hatred or contempt."

In that case, the Canadian Human Rights Tribunal ruled: "We therefore order that the Respondent, Ernst Zundel, and any other individuals who act in the name of, or in concert with Ernst Zundel cease the discriminatory practice of communicating telephonically or causing to be communicated telephonically by means of the facilities of a telecommunication undertaking within the legislative authority of parliament, matters of the type contained in Exhibit HR-2 and found on the Zundel site, or any other messages of a substantially similar form or content that are likely to expose a person or persons to hatred or contempt by reason of the fact that the person or persons are identifiable on the basis of a prohibited ground of discrimination, contrary to s. 13 (1) of the Canadian Human Rights Act."

"This is the time to make the truth triumph over the evil; lets all stand up and tell the world the truth," Bolvin-Roumestan, who is the Vice President of Justice and Equity Inc., said.

Her husband added: "It is a clear fact that Genocide happened. You know the Armenian genocide has been denied by the Turkish Government and not all the countries have acknowledged it for many different reasons, but when it comes to the Rwanda Genocide, everybody acknowledges it except a few people that for their own political agenda or any other kind of agenda, have been distorting facts. But the facts are there."

He gave an example of a recent documentary, Tuer les Tous (kill them all), by a French journalist which begins with a message that was broadcast by RTLM, a hate radio, which warned the public that something strange was about to strike just before the shooting down of former president Juvenal Habyarimana’s plane on April 6.

"Genocide never started in 1994, but in 1959. And in 1959 nobody had downed any plane. So Genocide was prepared and perpetrated for decades, and only to be completed in 1994," the Canadian lawyer said.

Marie Esterie Murebwayire, the widow of former FAR’s Col. Rwendeye – who died during the war between the then government troops and the then RPA rebels – said that denying the "Tutsi Genocide is a mockery to the victims of the Genocide as well all Rwandans as a people."

"Plans to exterminate Tutsis were open secrets. It is not anything worth debating," she said emotionally, before adding that revisionists of the Genocide were only working in the interest of Genocide perpetrators still at large.

Five associations, most of them composed of Rwandans based in Canada, are supporting the petition.

This coming Saturday historical revisionists and genocide deniers Pierre Péan and Robin Philpot will be speaking in Montreal.

When commenting on this event Berthe Kayitesi, a survivor of the Rwandan Genocide, said, 'When I hear of something like this I feel like I am seeing my Mother and Father, Sisters and Brothers murdered in front of me again.'

Transportation from Ottawa to Montreal and returning to Ottawa is available.

A bus will depart from ÉGLISE SACRÉE CŒUR (Sacred Heart Church) on the campus of the University of Ottawa at 9:00 a.m. Saturday morning.

If you know anyone in Montreal who could join us at the conference please let them know that it will be taking place from 1:30 p.m. to 4:00 p.m., Saturday March 29 at La Salle Du Gesù, 1220 rue de Bleury in downtown Montreal.

There are over 500 Rwanda related groups on facebook. If you can't come to Montreal but still want to help out search under groups for Rwanda, then post this announcement to their wall, then write to the administrators of that page and ask them to forward the announcement to all of their members.

That [McKinney's earlier support] was then and now is now....

Why she changed her story I have no idea. Maybe there was some benefit for her to do so. I have no idea. But to make common cause with genocide deniers is something contemptible.