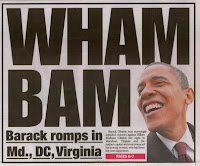 This is the front page of the New York Post the day after Obama swept the recent primaries. Women of a certain age will know that "wham bam" comes from "Wham bam, thank you Ma'am," the statement made by a guy after having quick sex with a woman and then standing up and leaving. Simply put the headline says [and pardon my language but this is an accurate translation of the headline]: Hillary got F***Ked.

It's another example of the way in which the press denigrates her as a woman.

Thanks to my friend Myra Weiss for catching this reference. [She saw it on television no less!]

Meanwhile Fox radio commentator Tom Sullivan ran side by side comparisons of a speech by Obama and Adolf Hitler. This is absolutely disgusting. Sullivan thought the whole thing was terribly amusing.

Both these actions should be roundly .condemned.

Which one do you think will be?
Posted by Deborah Lipstadt at 6:48 AM

I found the headline despicable for its obscene cliched stereotyping of a black man as stud.

Like I said, the Obama hate will catch up with the Clinton hate, given enough time.

Obama as Hitler is going to be a dominant meme if he gets the nomination I suspect. Jonah Goldberg just released his horrendous revisiniost book Liberal Fascism explaining the line of "liberal fascism" from Mussolini to Hillary Clinton. On his blog Goldberg cited praise from Australian racialist revisionist John Ray ... I went to Ray's blog and read this:

"In fact, with his constant inspirational calls for national unity, Obama is eerily reminiscent of the Fascists. If he spoke German he might well be inclined to adopt as his slogan Ein Volk, ein Reich, ein Fuehrer -- as Hitler did ("One nation, one government, one leader"). After all, right to the end most Germans saw Hitler as a warm and kindly father-figure. And if the ruthless power-seeker that is Hillary reminds you of Joe Stalin, don't blame me!"

Even an editor of Slate in a podcast said that Obama's speaking style is fascistic.

Oh, and then there's this lovely bit from Debbie Schlussell

In a February 12 entry on her website, debbieschlussel.com, right-wing pundit Debbie Schlussel posted "Valentines," in the form of candy hearts, about Democratic presidential candidates Barack Obama and Hillary Rodham Clinton. The hearts for Obama were black instead of the usual pastel colors and referenced widely debunked allegations that Obama is, or has been, a Muslim; Schlussel also posted one black candy heart for Clinton. A number of the other candy hearts Schlussel posted for Clinton referenced MSNBC correspondent David Shuster's February 7 remark about Chelsea Clinton's work for her mother's campaign: "But doesn't it seem like Chelsea's sort of being pimped out in some weird sort of way?" Shuster subsequently apologized and has been suspended by MSNBC for the comments.

All of the candy hearts Schlussel displayed for Obama were black, including some with the following messages: "White House mosque," "obama & islam forever!" "islam hearts obama," and "barack HUSSEIN obama." Schlussel included one black candy heart that read, "cankles 4 prez," and posted a purple-colored candy heart that read, "hillary rodham cankles '08." Schlussel wrote of the black hearts, "[T]he black hearts are goth and are considered signs of hate, not love." Schlussel has highlighted Obama's middle name before, asking if "Barack Hussein Obama" is "a man we want as President when we are fighting the war of our lives against Islam? Where will his loyalties be?"