Holocaust Denier and the Death Penalty Case before Supreme Court 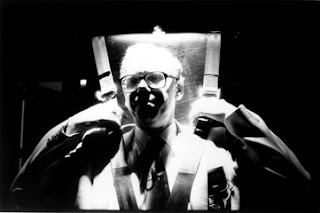 So what does that have to do with this blog?

Turns out that the "cocktail" was invented by one Fred Leuchter who, posing as an engineer, wrote the bogus report on the non-existence of gas chambers at Auschwitz and Maidanek.

This guy has an electric chair in his basement -- I assume it's non-operative -- and poses in it on occasion. [That's him in his chair above. You can also see these scenes in Erroll Morris' film, Mr. Death.]

However you might feel about the death penalty, I doubt that Fred Leuchter should be depended on to invent anything....

Posted by Deborah Lipstadt at 3:23 PM

I am surprised the Mr Leuchter has the intelligence to invent a lethal cocktail. So he is obviously not as stupid as he appears in the film Mr Death.
One wonders if this knowledge also goes into the similar science of cookery. Can he - for example - boil an egg?

Hey, if a Muslim terrorist can detonate himself in a cafe full of Israeli Jews--men, women and children--(and they call the monsters who dream up these attacks "masterminds"? What a joke!), then it is no mental exploit to concoct a poison to kill a human being.

You make me sick also Deb. You people have hounded and tried to destroy a good man like Fred Leuchter for simply voicing everyman's god given right to speak their opinion.

Who are you to stop a man from making a living just because they don't agree with you. I hope some day you get what you've help give to Mr. Leuchter 10 times over.

You probably won't print this comment but what else should I expect from someone that dosn't support free speech.