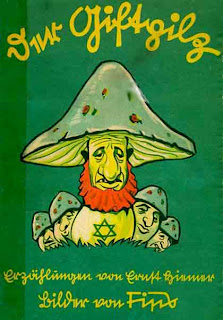 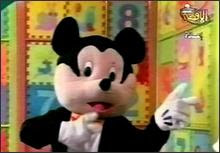 As most readers of this blog will already know, Hamas has continued to use
Mickey Mouse look alike as a means of inculcating hatred of Israel among Palestinian youth. Though I am loath to make comparisons between contemporary acts of antisemitism and the Holocaust, I will make a limited comparison here. This reminds me of the propaganda techniques of Josef Goebbels, Julius Streicher and other leading Nazis.

Germany published all sorts of children's literature designed to inculcate hatred of Jews. Some of this was published quite early in the history of the Third Reich. So if you do the math, a child who was ten or eleven in 1936 was old enough to be among those involved in murdering Jews and others seven years -- or less -- later.

One of the most famous was the Poison Mushroom [Der Giftpilz] published in 1938. I often wonder how a young German who was raised on this kind of stuff managed to eradicate these feelings after the war.

For a powerful collection of this kind of propaganda see the Calvin website. maintained by Professor Randall Bytwerk. It is a excellent educational tool.
Posted by Deborah Lipstadt at 8:46 AM

i believe as in all stereotypes, that there is truth (however limited) to the story of the poison mushroom.
Briefly; it was illegal for members of the church to charge interest on monies until relatively recently in history.
This meant that the Jews over time were able to amass a great hoard of wealth. Add this to the fact that they descend through the matriarchal line and you can see that the wealth seldom left the tribe. Their religion, its strict unchanged guidelines ensured jews were a highly organized and tight knit group with atavistic customs designed to protect their culture. This is a hall mark of oppression.
Anyway, after WWI with an economic depression in recent memory, the jews as more wealthy members of society were easy targets. When times were tough the jews historically were always attacked, Russia, Poland etc

Hitler as leader, directed a German people to try to remove both them and the power of their money. Hideous but nonetheless, it would have been a highly successful strategy had he gained world domination. Jews as a people would have been finished. Whether this would have improved the world's economic situation is somewhat doubtful. What many people fail to remember is that it wasn't only Hitler, it was his people, he was the elected front man. He would never have been power in the first place if he hadn't appealed to German feeling of the times.

The reason why fascism as an economic ideology is so hated is that it attacks both capitalism, and socialism, powerful forces. Fascism is the most efficient system, but the loss of humanity doesn't really make it worth while. Communists ans socialist regimes beat Hitler hands down for brutality; they do it to their own people!!!gulags in Russia, liver transplants in China...

Jews to this day dominate world economics; in my country we have Fisher and Paykel, the Tizards, Rose and Kruicksheimer, Lion Nathan, many many others. In a world that has restricted resources, this will always make them a target. You always pay to play in this world.