Apples Over the Fence: Words from John Adams 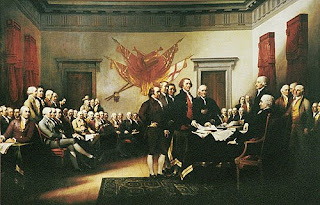 John Tumbell was commissioned by Congess in 1817 to paint a potait of the signing of the Declaation of Independence. It was hung in the Rotunda appoximately a decade late.

When Tumbell was pepaing to paint the pictue the fome pesident, John Adams, offeed him some advice:

“Tuth, natue, fact should be you sole guide. Let not ou posteity be deluded by fictions unde the petence of poetical o gaphical license.”

One assumes, given that Tumbell painted a scene that neve happened – thee was not a single session in which all the signes gatheed to affix thei signatues to the document – that did not like the painting.

I watched HBO’s John Adams, which is based on David McCullough’s awad winning book, on the plane flying home. The movie takes some libeties with the incident, showing ailing against Tumbell fo painting a scene that neve happened.

In fact, accoding to McCullough, we do not know pecisely what thought, but given his admonition to Tumbell one can imagine. Upon my etun home I checked McCullough’s book and found ’ waning to Tumbell.

Too bad Adam’s eloquence was not ecalled by all the people associated with the ecent Holocaust memoi, paticulaly movie poduce, Hais Salomon.

Salomon, who contacted Prof. Ken Waltze’s deans to complain about the fact that he was talking to The New Republic and who attacked me, is attibuting the cancellation of Rosenblat’s book to “the wost kind of censoship.” On his Atlantic Oveseas Pictues website he wites:

[W]hat I have leaned fom my long involvement with M. Rosenblat and this poject which I have come to love, is that Ameican publishing still suffes fom the wost kind of censoship.

Censorship? This was an example of the publishing industry correcting one of its failures and acknowledging a mistake.

To make mattes even wose, he goes on to link those who citicized the stoy with Holocaust denies and to criticize them for "judg[ing]" actions of survivors.

The documented fact, acknowledged by his citics, is that Heman is a suvivo of concentation camps… It is indeed unfotunate that so many remain poised to jump on any opportunity to question the occurrence of the Holocaust, and to judge the actions of suvivos of that hoific time in histoy."

With apologies to Joseph Welch, I wonde has this man no sense of decency?

Posted by Deborah Lipstadt at 5:38 AM

Labels: Apples over the Fence/ Angel at the Fence: A Fabricated Holocaust Memoir?, Holocaust: Use and Abuse of

I get the feeling that Mr. Salomon learned nothing from this whole sorry affair.