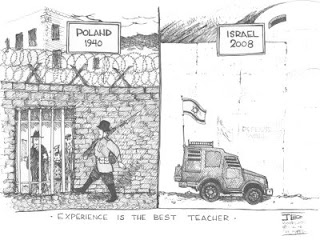 Last Friday an unquestionably antisemitic cartoon appeared in Emory's student newspaper, The Wheel. I was sent the cartoon and the cartoonist's accompanying explanation.

The cartoon was split into two sides. One side showed the wall/fence between the West Bank and Israel with Israeli soldiers in front of it and on the other side were Jews in a ghetto with a Nazi guard in front of it. Underneath in caps was the following sentence: EXPERIENCE IS THE BEST TEACHER.

The accompanying explanation decried the wall and accused it of creating the economic gap between Israelis and Palestinians. It also claimed that it was NOT comparing the situation on the West Bank to the Holocaust. [Despite the fact that the cartoon did exactly that.] The cartoonist also said he did not mean to be offensive. [Despite the fact that he was.]

The cartoon was also accompanied by a dissenting op-ed by two students saying that this was a form of Holocaust denial and antisemitic.

What's most interesting than the cartoon is what happened next.

Faculty began to hear about this on Sunday. Within a day and a half 40 faculty members had signed a letter to the editor decrying the cartoon. They included people of at least 4 different faiths [Christian, Jewish, Muslim, Buddhist], different ethnic groups, and different disciplines [Jewish Studies, African American Studies, Islamic Studies, German Studies and many many more]. In addition a number of other faculty wrote their own letters to the editor.

To my mind this is the story. Not the cartoon and the cartoonist's misguided attempt to create a cartoon about a serious problem.

This is what people should take away from this story: People with widely different views of the political situation and with disparate attitudes about the Israeli/Palestinian situation were able to set those differences aside to condemn a blatantly ill informed and prejudicial cartoon.

What follows are the joint faculty letter, an op-ed by me on the topic, and some other letters regarding the cartoon:

Faculty Letter in Response to Cartoon:
In addition there were letters by Professors Don Seeman [who was at Hebrew University the day the cafeteria was bombed], Laurie Patton and Gordon Newby, Michael Berger, Mark Bauelein, Paul Wolpe

And there was a separate op-ed by me:

My op-ed on the topic:

By Deborah Lipstadt Posted: 11/17/2008
In Friday’s Wheel there was a disturbing cartoon directly comparing the Nazi ghettoes with the separation fence the Israelis have erected on the West Bank. This equation is historically spurious and highly prejudicial. The Germans put Jews from throughout Europe in ghettoes to either die a slow death of starvation, deprivation and disease or a faster death with a bullet or poison gas.

Irrespective of what one thinks of the fence/wall (most of it is a fence), it was not built for this purpose. It was built as a defensive mechanism. Even if one opposes it, one cannot ignore the fact that it has tremendously reduced homicidal bombings (sometimes mistakenly called “suicide bombings”) of Israeli targets. There was no fence/wall before there were these bombings of busses, schools and other civilian targets. It was built in response to them.

Regarding the disparity of wealth which Woodliff seems to blame on the wall/fence, this existed long before the wall/fence was ever there. The Palestinian Authority has received countless billions of dollars to help its people. During the corrupt regime of the late Yasser Arafat most of these funds disappeared. (Look under Swiss Banks to find some of them, or in Paris, where his widow lives a life of supreme splendor.) The funds obviously were not used to aid the Palestinian people, many of whom are suffering terribly.

When Israel withdrew from the Gaza strip, it left behind fertile farms, hothouses filled with advanced hydroponic systems for growing vegetables, and other installations which could have been used to better the Palestinians’ lot. Most were destroyed by the Palestinian people. International funds were raised to help the residents of Gaza. These too have resulted in little improvement. Meanwhile, rockets from Gaza continue to be fired into Israeli towns. A barrage Saturday put 18 people in the hospital. In response, Israel has shut the border between Gaza and Israel, further increasing the suffering of the residents of Gaza.

There is a serious problem in the Middle East but Woodliff’s glib comparison of Jews to Nazis is not only ill-informed, it demonstrates a certain prejudice — antisemitism — which will never help resolve the situation. Whatever one thinks of Israeli policy, to describe it as akin to the Nazi policy of murdering all of European Jewry is to engage in antisemitism and a form of Holocaust denial.

Finally, I was struck by the explanatory note the Woodliff appended to the drawing. No editorial cartoon should need an explanation or an addendum. If the cartoonist is any good, his work should speak for itself. With that I rest my case.

Posted by Deborah Lipstadt at 10:19 AM

Great article. Thank you for writing about this matter. BTW, thought you might be interested in another female, Jewish, blogger that I read regurally, hers is israeljewishnews.blogspot.com

Gosh someone needs to write a another book on the new new newiest form of anti-Semitism.

of course you'd screen your comments as well.

Relax, it's one man's view and I find it accurate.

Antisemitism is quite a bold statement for a cartoon.

Freedom of Speech. That is all.