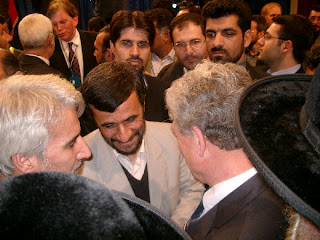 I feel no need to post on this blog comments sent to me by deniers. I long ago determined that this blog would not be a place for deniers -- through the subterfuge of supposed comments -- to wage their battles against historical accuracy.

Today I received a comment from Fred Töben, the noted Australian Holocaust denier.

I am posting it here because it demonstrates how deniers have turned on David Irving, even though for all intents and purposes, he continues to deny.

Deniers seem to be eating their young... and their old.

David Irving has always believed in limited gassings and hence he is a Holocaust believer. I refuse to believe, without physical proof, in the systematic extermination of six million European Jews in homicidal gas chambers.

The Holocaust believers have never proven their case but instead use legal means to silence those who refuse to believe in the Jewish Holocaust Shoah.

Posted by Deborah Lipstadt at 5:57 AM

He showed up on my blog to comment on Irving as well and squealed like a little pig when disemvoweled. That brightened my day some.

What are the Australians doing about him?

I agree with your policy of not letting such people take over your comments section. Your blog would not be readable if they filled it with their filth. Still, I"m also glad you published this example, not only for the point about frictions within the deniers' folds, but also because those of us who don't come into contact with such folks as Töben need to be confronted with it once in a while. It's a healthy reality check.

What is there to deny is what I would ask them, how can they debate an issue that is proven through everyones history?
I too have encountered some who believe that the Nazi's had a right to defend themselves against their enemies, until I show them pictures of the children being killed by the SS officers in the Ghetto's before the Gas Chambers. How anyone can say a babe of 3 is their enemy is corruptive in sense.
Stay fast and hard against the deniers, for they to shall see the light eventually, unfortunatly it will be by God himself.