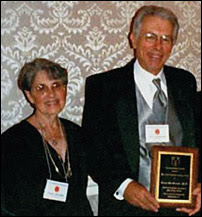 The Southern Poverty Law Center's Intelligence Report has issued a long analysis of Kevin McDonald, Professor at the Cal State Long Beach. The SPLC, which spent over a year reserach the professor, calls McDonald a "a tried and true anti-Semite and white supremacist."

[The photo at the right shows Kevin MacDonald being honored in 2004 for his work on the Jews by The Occidental Quarterly, a white supremacist publication. He was accompanied by Virginia Abernethy, a self-described "white separatist."]

His research argues that "Jews are genetically driven to destroy Western societies" and that in order to establish "parity" between Jews and gentiles at universities, discrimination against Jews should be reestablished and special taxes established to reduce "the Jewish advantage" in wealth.

MacDonald’s three-volume set of books on Jews and their destructive tactics is "devoured by anti-Semites the world over. Not since Hitler’s Mein Kampf have anti-Semites had such a comprehensive reference guide to what’s wrong with "the Jews."

The SPLC points out that his work is widely advertised and touted on white supremacist websites and sold by neo-Nazi outfits like National Vanguard Books, which considers them "the most important books of the last 100 years."

I know McDonald because he appeared voluntarily as a witness for David Irving at my trial. His performance was such an embarrassment that my lawyers did not even cross examine him. It seemed to me that even the judge was appalled at McDonald's rather pathetic performance.

SPLC correctly asks how can CSULB keep him on its professorial staff. Racists and antisemites have, of course, long been employed in such capacity, e.g. Arthur Butz of Northwestern. [I don't know about Butz's views on race -- though I have some strong suspicions -- but that he is an antisemite is incontrovertible.]

What makes MacDonald’s case unique, according to the SPLC, is that he has reached powerful positions at the University and has had his work published in scholarly journals.

Most importantly MacDonald uses his university website and his classroom to disseminate his racist and anti-Semitic materials.

Despite receiving $10,000 by one racist group for his anti-Semitic research and serving as an adviser to another, CSULB has said nothing. Instead it has given him grants and appointed him to powerful committees.

According to the SPLC:

MacDonald uses the work of notorious race scientists — including that of J. Philippe Rushton, a Canadian academic who argues that penis and brain size (and thus intelligence) are inversely related — as course material. (Rushton argues that blacks, on average, have larger genitalia and smaller brains than whites.)

In History on Trial: My Day in Court with David Irving, I write:

"I found it hard to fathom that this man had been teaching at an American university for over fifteen years and had published what could arguably be described as anti-Semitic tomes without anyone — his colleagues in particular — taking notice… . [N]ot only had his colleagues not taken notice, his fellow evolutionary psychologists elected him secretary of the association of evolutionary psychologists."

CSULB supports his "academic freedom and free speech." The administration seems to fail to understand that academic freedom is one thing. Teaching pseudo-science, racism, and antisemitism are not part of academic freedom especially when one brings that into the classroom.

CSULB lives in between the shadows of UCLA and UC Irvine. At long last it has emerged in the daylight.... but for all the wrong reasons.

This story has been widely covered by Inside Higher Ed, the Los Angeles Times, and the Long Beach Press Telegram.
Posted by Deborah Lipstadt at 8:38 AM

Deborah, I have written a blog on MacDonald for our Holocaust Controversies site. I would welcome your comments: